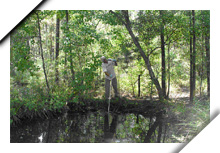 SKA was retained by an independent oil and gas exploration and production company to provide professional environmental services associated with an inactive oil well Site located in the Jack Gore Baygall Unit of the Big Thicket National Preserve in Hardin County, Texas.  Previous Site assessment and investigations conducted on behalf of the National Park Service (NPS) and the Railroad Commission of Texas (RRC) indentified former oil and/or gas Exploration and Production (E&P) activities including a former reserve pit that had not been closed in accordance with state and federal regulations.  These initial investigations identified petroleum hydrocarbon impacts to soils, sediments, and shallow groundwater in the vicinity of the historical well borehole and reserve pit.

SKA developed a Site investigation and closure strategy in accordance with NPS regulations to further assess the petroleum hydrocarbon impacts and close the former reserve pit.  SKA’s Site investigations included a magnetic survey, soil boring and temporary monitoring well installation and sampling, and interpretation of analytical testing results including risk-based analysis.  SKA’s understanding of RRC regulations and knowledge of contamination migration pathways effectively reduced the required response actions and the impact on the surrounding environment.  Assessment results determined that response actions were only required for the former reserve pit.

Based on NPS approval of our findings and conclusions, SKA prepared a NPS-required Plan of Operations providing a detailed plan and outline of the Site closure requirements.  The Plan of Operations was provided to both the NPS and RRC for their review and approval.  SKA worked closely with NPS personnel as it pertains to NPS nonfederal oil and gas rights regulations outlined in 36 CFR 9B for mitigation measures to be incorporated into the Plan of Operations.  These mitigation measures were required for the successful execution of the Plan of Operations as it pertains to the protection of the immediately surrounding environment, such as ecology, wildlife habitat, and watershed.  SKA also worked closely with NPS personnel as our reports were provided for public review and comment and ultimately NPS approval.  SKA worked with RRC personnel to prepare and obtain approval for a Land Farm permit to transport and place the excavated soils impacted with TPH – thereby reducing soils sent to the landfill.  Our Plan of Operations was ultimately approved by both the NPS and RRC for pit closure activities which included fluid removal, pit excavation, soil confirmation sampling, and land farming of excavated media (TPH-impacted soil).

Once the soil response actions were completed of the former reserve pit, SKA prepared a Response Action Completion Report (RACR) for both RRC and NPS review and approval.  The response actions were deemed successful and the Site was granted final regulatory closure by both agencies in November 2009.  The NPS specifically provided a closure letter referencing the work was successfully completed in accordance with their approved Plan of Operations.